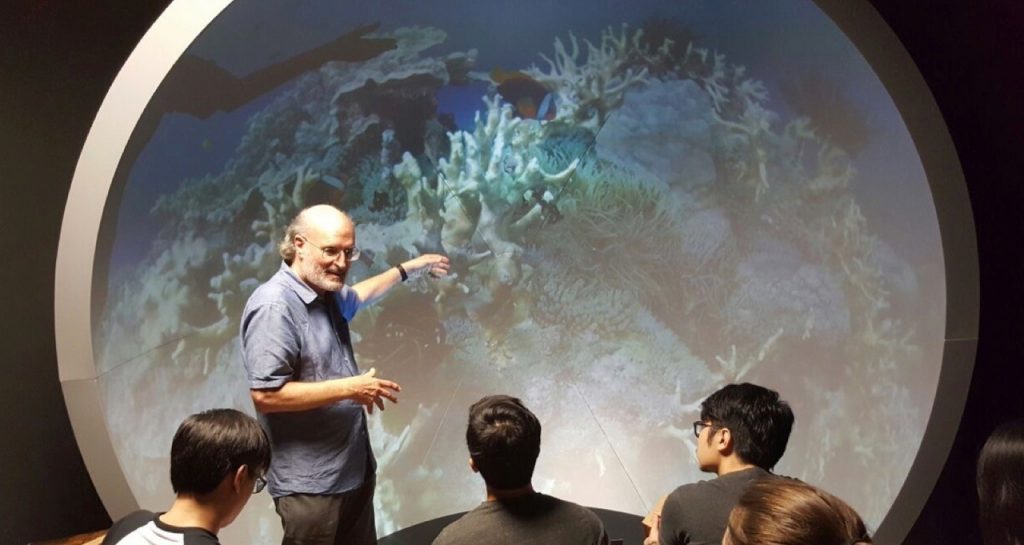 ”In cinema as we know it, there is a language of filmmaking which has developed (wide shot, close-up, over the shoulder, stage line, moving shots, static shots, effective edit points, sound cuts, music cuts, etc.) which we all use, even as we bring our own individual styles to making films. As far as I can tell, all of these working rules are dependent on the image being shown within a frame. It is the common frame of reference for all of our work in film or television.

Gigantic screen immersive dome screens 60 to 90 feet/18m to 30m wide and 3 to 5 or 6 stories tall create cinema projections where we cant see the edges of the frame. The whole group of giant screen immersive film and digital formats — and now VR and 3600 cinema — have one thing in common: the gigantic images extend the edges of the projected film images to the edge of our peripheral vision or even beyond it. I think we are not just talking about bigger films here, but a new cinematic world. It is a frameless view, an unframed moving image medium. I think the language of the immersive screen cinema is still being invented, and I think it is different from what we, both filmmakers and audiences, have come to know and understand.” (Introduction to Ben Shedd’s paper EXPLODING THE FRAME)

The Exploding The Frame paper on directing and designing films for Immersive cinema was originally researched and written in 1989 and has now expanded from 5 story IMAX Dome screens to include all viewing screens where there are high-resolution, wide field views, and where viewers are standing or sitting closer than the width of the screen. These newer screens, like the huge WISDOME immersive screens and VR headsets and 3600 surround cinema, require a frameless way ot designing imagery and directing image sequences and part of a new expansive cinematic language for makers of immersive movies.

This Seminar Will draw from over 30 years practice and theory in researching, making, and teaching immersive dome movie making and offer numerous ideas and tools for effectively designing imagery and sequences from the center out.]